What is Happening to HMNY?

MONITISE PLC ORD GBP0.01 (OTCMKTS:HMNY) continues to make a steady advance on developments that the company is looking to sell its content business. The shares have more than doubled since hitting a 52-week low at the end of last year climbing from $1.63 to its current levels of $3.93.

The company announced that it was in early talks to potentially sell its marketing content business, Markco Media, in a bid to transition to cloud-based services. Monitise bought Markco Media, best known for being the parent company of coupon and deal site MyVoucherCodes.co.uk in 2014. Mohandas Koehler, Martin.

MONIF has issued a string of revenue warnings on the back of a change in its business model in 2014. The company could possibly be venturing into a new business model if the stock price is any indicator. The stock is poised for significant gains from a technical perspective.

MONIF as the ex-darling of small caps that looked destined for bigger things with large cap Companies such as IBM, Telefonica, MasterCard and Santander all invested significantly in the Company. MONIF exploded over $1 at the time but collapsed after the Company missed revenue projections significantly.

MONITISE PLC (OTCMKTS:MONIF) bills itself as the largest Mobile Money specialist in the world with a single-minded and realistic vision: to make money totally mobile across the globe. MONIF is working with over 300 of the world’s leading businesses and financial institutions across global territories to make the most of the opportunities this creates.

Interactions and transactions worth billions of dollars are made by millions of people all over the world, using Monitise technology. They book tickets and accommodation, and they buy and sell online. They pay bills and move their money around. They perform everyday tasks on all kinds of devices. MONIF helps them do it all smarter and faster than ever.

Since it was founded in 2003, it has been among the first to innovate in banking apps. In the early days, it had linked banks to mobile phone operators so people could manage their finances and make payments from their phones. Today, it works in the UK, North America and the Middle East, helping brands create amazing digital experiences in financial services, retail, telecoms, automotive, sport and travel.

The Company offers a strong mobile banking platform through its Bank Anywhere, Pay Anyone, Buy Anything, and Engage Anytime services and has developed strong partnerships with Visa and MasterCard that connect it with millions of users around the world. Already 28 million consumers benefit from Monitise’s patented technology to ‘bank anywhere’, ‘pay anyone’ and ‘buy anything’, accounting for $71bn of payments, purchases and transfers annually.

In early January MONIF announced it has partnered with the MoneyPass Network to offer a range of advanced Mobile Money services and card control capabilities to card issuers in the United States. The MoneyPass Network is operated by Elan Financial Services, a division of U.S. Bank. Monitise will be delivering a range of capabilities to MoneyPass Mobile users, including core mobile banking services such as balance checks and transfers, as well as more advanced services like mobile check deposit and cardholder-managed security controls. The scalable, cloud-based platform provided by Monitise will enable MoneyPass issuers to offer mobile money services rapidly, easily and securely.

MONIF is currently trading at a $125 million market valuation. The company has been on a brutal decline after miss revenue and profit projections. In 2014, the company announced a change in its business model to more effectively compete and transition into a more profitable model. Time will tell if the decision will pay off.

We will be updating on MONIF when more details emerge so make sure you are subscribed to Microcapspot so you know what’s going on with MONIF. 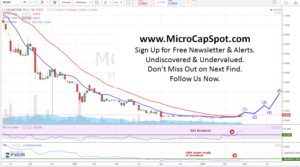 Disclosure: we hold no position in MONIF either long or short at the publication of this article.