Terra Tech Corp (OTCMKTS:TRTC) has been gaining significant traction since the beginning of the year where the stock has gained over 100% on significantly increasing volume. TRTC chart is breaking out and will likely make new 52-week highs sooner than letter. Take a look at are projected price movement.

Just recently, GW Pharmaceuticals announced positive Phase 3 trial data for its drug Epidiolex, for the treatment of Dravet syndrome. This is huge news for the marijuana industry and proves that cannabis related companies can create innovative products and advance the medical field not seen any many years. The clinical data is highly important in that it represents a potential new class of medications. Derek Peter, Terra Tech CEO stated, “It’s exciting to see that clinical data is continuing to show what many patients have been experiencing personally — that cannabis-based medicines are effective.”

Terra Tech Corp (OTCMKTS:TRTC) recently announced that it will be opening a new dispensary for marijuana. The dispensary that was opened in Nevada is a 3,900 square foot facility. Through the dispensary TRTC will sell premium medical cannabis, including flowers, shatters, waxes and oils, among other high-quality cannabis products from a range of reputable providers of superior grade medical cannabis. The dispensary is due for its final inspections and TRTC expects to receive is business license from Las Vegas as early as April. Currently, TRTC grand opening date for its dispensary is set for April 20, 2016.

TRTC Chief Executive was a powerhouse in the investment world. It is run by Derek Peterson who is a former Vice President at Morgan Stanley. He left Wall Street because he saw a huge opportunity in medical marijuana. His vision is setting up growing facilities in various states to grow herbs such as basil and thyme with plans to switch to Marijuana production as state laws permit.

Terra Tech Corp (OTCMKTS:TRTC) is from a technical chart perspective is breakout out in a big way. It wouldn’t be surprising to see TRTC break its prior highs and potentially climb $0.24 level. From there it could even climb to the $0.40 to $0.60 level long-term depending on momentum and its new developments. The stock is breaking out of a long base and has been forming a bowl shape pattern. The stock is just beginning to form the upward slopping portion of the bowl and the stock has broken out above its 10 and 30 weekly moving average on a massive spike in volume. TRTC is beginning to show a stair-step pattern which is an extremely powerful technical pattern where the stock advances on large volume than consolidates for a few weeks and makes another powerful advance surpassing its prior high and consolidating again to repeat the pattern. Take a look at the chart below for potential price movement.

MicrocapSpot has covered TRTC and it in our previous post, we stated that TRTC was primed for more gains. Since then the stock has gained over 20%. TRTC was initially incorporated as Private Secretary, Inc. on July 22, 2008 in the State of Nevada. It originally had planned to develop a software program that would allow for automatic call processing through VoIP technology. On January 27, 2012, the Company filed an amendment to its Articles of Incorporation changing its name to Terra Tech Corp and a new pot stock was born. 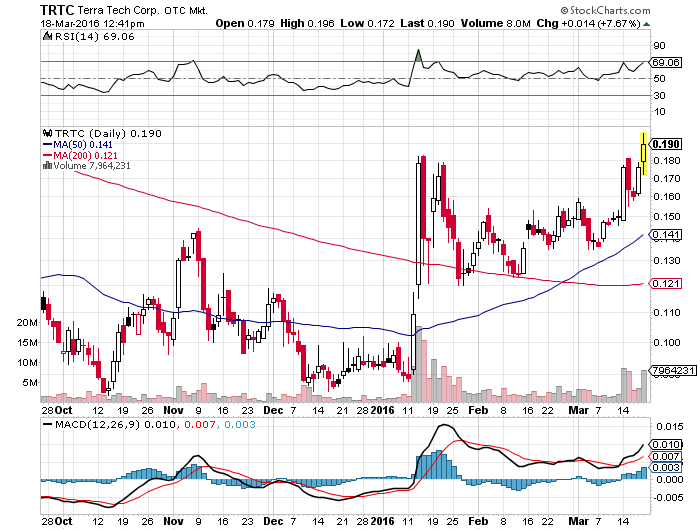 TRTC is currently trading at a $54 million market valuation. Technically the stock is showing an extremely powerful bowl and stair step patterns. It will be opening its first dispensary in Nevada in a little over a month which should provide a boost to its revenues given tourist season beginning. In addition, it has developed a three pronged strategy through its subsidies and currently sells to major grocery chains like Walmart and Kroger which is a boost to investors’ confidence. TRTC will likely continue its turnaround in a meaningful way as it rises from the ashes. Stay tuned as we will be updating subscribers daily.

We will be updating on TRTC when more details emerge so make sure you are subscribed to Microcapspot so you know what’s going on with TRTC.

Disclosure: we hold no position in TRTC either long or short at the publication of this article and we have not been compensated for this article.