Plandai Biotechnology Inc (OTCMKTS:PLPL) announced that it had officially launched in North America and shipped its first product to USA customers. The London-based company has primarily sold in Africa and Western Europe but continues to expand into new markets. It expects to sell in South America at some point as part of its global expansion plans.

Callum Cottrell-Duffield VP of Sales stated, “”Production is now at the level where we feel comfortable supplying the US market on top of the other regions where we are actively selling. As an ingredient supplier, it is critical that we ensure adequate supply for our customers so that we never hold up their manufacturing processes. USN has been a valued partner since we first launched Phytofare® and we have been in continual contact to determine the best time to launch in America. We are enthused that our production has been stable and that very soon our investors, and those who have been following our progress for the past few years, will be able to go to their local stores and purchase products containing Phytofare®. Establishing a foothold in the US, first by partnering with a major distributor in AIDP as announced last week, and now with shipping our first significant amount of product to a US customer, is a huge milestone for Plandaí.”

Phytofare has been clinically shown in double blind human studies to have ten times the level of bioavailability over generic green tea extracts. Not only is Phytofare better absorbed in the bloodstream, all eight catechins are present where they remain at therapeutic levels for over 24 hours. Generic extracts, by comparison, were shown to have only two catechins, both of which were absent from the system after four hours. This difference means that customers and consumers can take much smaller doses and achieve greater clinical outcomes.

In recent news and developments, Plandai Biotechnology Inc (OTCMKTS:PLPL) announced that this is the first quarter of sales. The sales were shipped and sold across four continents: South Africa, Europe, Australia, and India. Over a half a ton (640kg) of Phytofare® Catechin Complex were sold and shipped to customers during the quarter.

As for the forecast for Q3 and the coming months, PLPL’s goal is to reach about 500kg of sales per month. If the trend continues as it has this should be a relatively easily attainable goal for Q3. It hopes to hit 1,500kg for Q3 which is almost double what it has done in the prior quarter. The company anticipates and has a set a goal to hit over 1 ton (1,000kg) per month by the end of the year. It is continuing to expand it sales across the globe. It expects to successfully expand into North America, South America, and Asia in the coming months.

According to the VP of Sales, “This past quarter represents the first quarter where we had full operating capacity and were able to establish significant sales in multiple territories. The hail storm last Spring set back our production and impacted our inventory, but we were able to launch our Phytofare® product regardless and start gaining traction in the markets. We’ve been able to steadily grow our customer base over the past six months and re-orders are growing month-to-month, both of which are positive signs for the future of Plandaí.”

In other developments, Plandai Biotechnology Inc (OTCMKTS:PLPL) announced that it has nearly completed its 2015 audit results and expects to file its Form 10-K in the coming months. Its quarterly reports will require more time but should be filed shortly thereafter. PLPL had to delay the release because the auditor had resigned just a few days prior to the original filing deadline.

PLPL. and its subsidiaries develop highly phyto-available™ extracts. Plandaí Biotechnology controls every aspect of the process, from growing the raw materials on its farms in South Africa, to producing its proprietary Phytofare® extracts in-house, allowing the Company to guarantee the continuity of supply as well as quality control throughout the entire process. Targeted industries for the Company’s products include beverage, cosmeceutical, wellness, nutraceutical, anti-aging, and pharmaceutical.

PLPL is currently trading at a $12 million market valuation. The company is about to grow exponentially with its new product and the rapid traction it is gaining. It expects to eventually reach over one ton of sales per month compared to its current goal of half a ton per month. This exciting story is just beginning. Stay tuned for more updates.

We will be updating on PLPL when more details emerge so make sure you are subscribed to Microcapspot so you know what’s going on with PLPL. 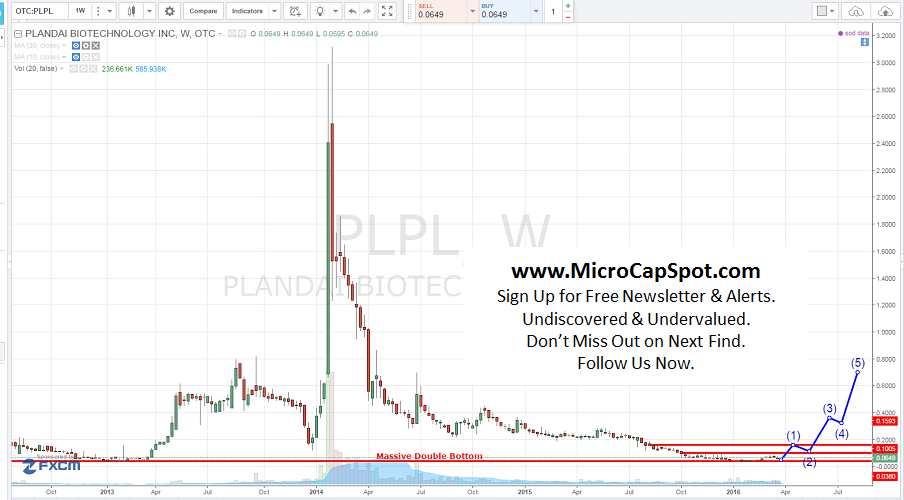 Disclosure: we hold no position in PLPL either long or short at the publication of this article and we have not been compensated for this article.