Tauriga Sciences Inc (OTCMKTS:TAUG) has had a slew of recent developments that have propelled the stock higher. In the last week alone, the stock has climbed over 50%. At the beginning for April, TAUG announced that it had appointed Frank Orlowski to its advisory board. Frank has over 20 years of experience in the pharmaceutical industry. In addition it also announced that it appointed Keith Berman to its board of directors as well.

We first wrote about TAUG on March 28, 2016 and the stock has climbed 150% since we featured it. Be sure to sign up for our free newsletter and alerts to not miss the next pick.

In other exciting developments, the company closed a private equity placement for $105,500. The terms of this private placement are as follows: $0.004 per share of common stock with a related three year warrant for 40% of each share of common stock purchased and an exercise price of $0.01 per share. The funds will be used for the ongoing litigation against its prior auditor in the latter part of the article.

Chief Executive Officer Set Shaw expressed, “We are very pleased to have attracted such a qualified director with a breadth of knowledge in both the technical areas of the life sciences space as well as complex corporate litigation. We look forward to working closely with Mr. Berman as Tauriga continues to strive towards a successful future for its shareholders.” Keith M. Berman brings more than 35 years’ experience in the healthcare field, having worked with such companies as Technicon Corporation and Boehringer-Mannheim Corporation. Mr. Berman also was the founder of Cymedix, the operating division of the former Ramp Corp

TAUG is a diversified life sciences company focused on generating profitable revenues through its present and future holdings. The mission of TAUG is to acquire and build a diversified portfolio of cutting edge technology assets that is capital efficient and of significant value to the shareholders. Its business model includes the acquisition of licenses, equity stakes, rights on both an exclusive and non-exclusive basis, and entire businesses.

TAUG is currently trading at a $8 million market valuation. The company has provided an update regarding its pending legal actions against its prior audit firm. A settlement could net the company significant monetary compensation for damages. 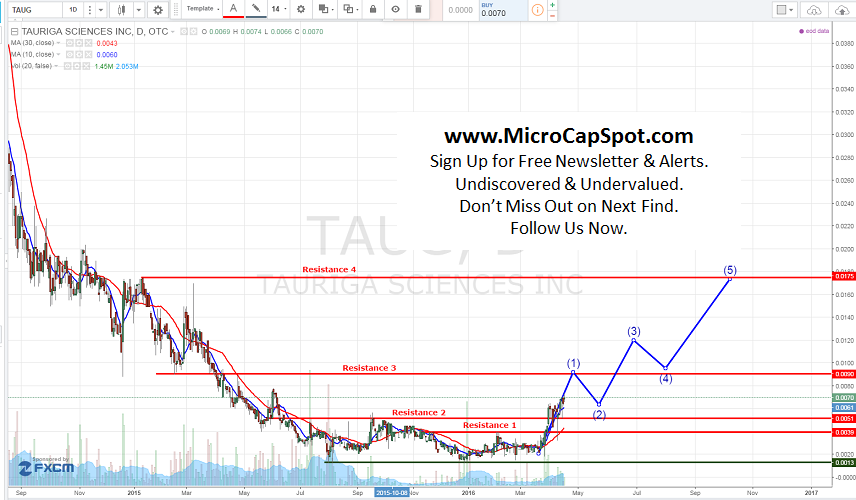