Decision Diagnostics Corp (OTCMKTS:DECN) staged a huge rally today on the company’s update regarding its litigation against J&J LifeScan. DECN announced that it has opened a lawsuit against J&J and its LifeScan divisions. Its litigation is seeking damages and compensation between $400 million and $700 million for incidences of infringement against two separate patents. MicroCap Spotlight previously wrote about this on March 11 and the stock has gained 100% since our feature.

J&J LifeScan divisions received huge revenues in excess of $2 billion in each of the last six years. DECN has hired a nationally prominent legal counsel in the arena of patents. Legal counsel has strongly urged the pursuit of legal action after an extensive review. It is such a clear patent violation that there is no other course DECN could pursue. Even if just a fraction of the awards and damages are received through a settlement, say 10%, DECN and its subsidiaries would receive windfall award of $40 million and $70 million. The stock could potentially double or triple from such settlement. Given the $2 billion annual revenues (roughly $12 billion over the six years), this seems to be a small settlement versus going to court and receiving willful infringement damages.

Litigation campaigns from Johnson & Johnson LifeScan, prior to the regulatory approval and Genstrip product introduction, began where Johnson and Johnson’s made threats and intimidation to prevent the introduction of Genstrip to the diabetic population. J&J expanded its strategy through a communication campaign targeting all existing and prospective Genstrip customers. The company threatened to sue any commercial Genstrip purchaser for patent infringement. Because of this DECN eliminated its marketing plans for the Genstrip product through all second and third party seller.

DECN will likely receive significant damages from Johnson and Johnson given the recent ruling in favor of DECN and J&Js questionable use of patent intimidation to create a foothold on the market. A district judge ordered that J&J make a bond of $12.7M to be lodged. DECN will likely receive more damages for J&Js actions and behavior that had severe adverse financial impact to DECN.

DECN has spent the last several years planning and developing several new products that are finally ready to be released this year. The new products are for diagnostic testing and other devices. In addition, DECN will now be able to and is poised to sell millions of Genstrip to diabetic patients that are superior and significantly cheaper than what is currently available on the market. DECN has a contract manufacturer domestically and internationally to scale operations as needed. 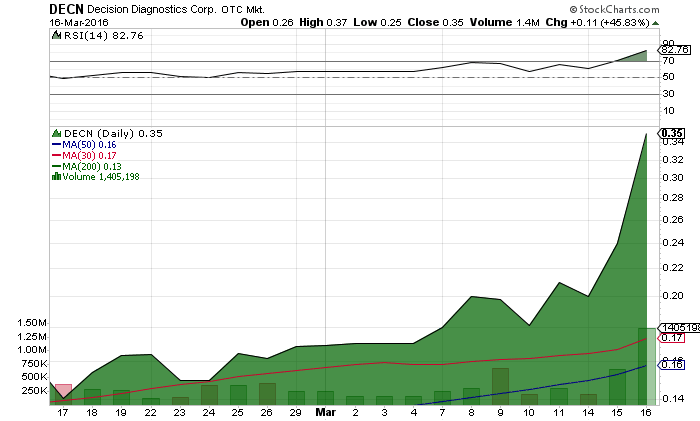 DECN is currently trading at a $23 million market valuation. Given the recent developments of the new lawsuit against J&J, DECN could see significant awards either through a settlement or a jury awarding damages. In addition to the fact the company has developed several new products ready for release should further ignite this exciting story. Stay tuned as we will update as more developments come available.

We will be updating on DECN when more details emerge so make sure you are subscribed to Microcapspot so you know what’s going on with DECN.

Disclosure: we hold no position in DECN either long or short and we have not been compensated for this article.