Car Charging Group Inc (OTCMKTS:CCGI) continues to update its filings with the SEC to become current. It recently filed its 1st Half 2015 financial performance results. CCGI made a gross profit for the first time in its history and also continues to show strong growth while reducing operating expenses and net losses. Some of the key highlights in the financial report are:

CCGI’s Chief Executive Officer stated, “In the first half of 2015, the Company’s acquisition integration strategy continued to deliver favorable financial improvements as compared to 2014. We demonstrated growth in our key areas, including charging equipment sales, fees and revenues, and also began the implementation of cost reductions that were vital to operating the Company in an efficient manner moving forward. This execution led to a significant reduction in net loss per share.”

In addition, he also explained, “We have dedicated major project management resources to ensure the rapid completion of our filings with the SEC. We anticipate that the improved timeframes for our financial reporting should have a positive effect on our shareholder’s confidence in the Company.”

CCGI recently announced that it had finalized an agreement with Green Commuter to purchase 200 Blink Level 2 EV charging stations and 50 Blink DC Fast Charging (DCFC) stations. This will facilitate the charging of the electric cars included in Green Commuter’s vanpool and car sharing program

CCGI’s CEO commented, “”As a company committed to widespread EV charging infrastructure and reducing greenhouse gases, we proudly support innovative business models aligned with that mission. We believe that Green Commuter’s vanpool and car sharing program provides a new and sustainable approach to maximizing vehicle resources and improving travel for a large commuter base. This is a sizable unit commitment from a strategic partner, and we are delighted to enable Green Commuter’s mobility solutions with our Blink EV infrastructure and access to Blink Network.”

With the increasing adopting over electric vehicles across the United States, CCGI is set up for potentially massive growth as the entire industry will lift all boats. CCGI will be able to capitalize significantly on this opportunity.

Tesla will be coming out with a more affordable base model. As more EV come into the market, people will need a place to charge their vehicles. This is a market that has all of the right catalysts and CCGI could be at the center of it.

Two recent SC 13/Gs filed in the last quarter from two major institutional investors filed schedule 13/Gs declaring and acquiring more than 5% ownership taken in the last quarter of 2015. Horton Capital Partners LLC took ownership of 5.4 Million shares with additional warrants to purchase more. & Wolverine Flagship Fund acquired 3.9 million shares during the same time frame. This is a major investment in CCGI and vote of confidence to their strategy and business model.
CCGI also recently released its 2014 Annual Earnings Report which showed significant progress for the company and likely just the start of a turnaround for the company. Below are the highlights and show that there is explosive growth to this company and significant catalysts.
• EV Charging H/W Sales grew 11,000% from $48k to $565k
• EV Charging Service Fees grew 400% from $308k to $1.49M
• Grant/Rebate Revenue grew almost 10,000% from $91k to $950k
• Charging output grew nearly 400% from 281k to 1.46M

The CEO was quoted saying “2014 was a transitional year for CarCharging as we integrated the four EV charging providers that were acquired in 2013. In 2014, CarCharging converted contracts with large retailers, parking management firms, and property owners from ECOtality to CarCharging, resumed sales of Blink HQ, a residential EV charging station, adjusted EV charging fee pricing policies; and introduced various Blink Network enhancements, including kilowatt-hour (kWh) pricing and remote start functionality from the Blink mobile app. CarCharging also began participating in Nissan’s No Charge to Charge program, which provided an additional stream of revenue for the company.

CCGI has more than 45 strategic partnerships across multiple business sectors including multi-family residential and commercial properties, parking garages, shopping malls, retail parking, and municipalities. CCGI’s partners include, but are not limited to Ace Parking, Central Parking, Equity One, Equity Residential, Icon Parking, Rapid Parking, Related, USA Parking, Walgreens, the Pennsylvania Department of Environmental Protection, the City of Miami Beach, the City of West Palm Beach, and the City of Norwalk, Connecticut that manage or own a total of 6.5 million parking spaces.

Below is a video where Michael Farkas, chief visionary officer of Car Charging Group Inc., talks about the construction of a fast-charging station network for electric vehicles in the U.S.

Just recently, there was the creation of the ROEV Association. A conglomerate of five industry partners including two of the top EV automakers, BMW of North America and Nissan, together with the three largest EV charging networks in the U.S., CCGI, ChargePoint, and NRG EVgo. Together, ROEV’s founding partners operate 91% – more than 17,500 – of public, networked EV charging ports in the U.S. (US DOE Alternative Fueling Station Locator) and the Association is encouraging all EV industry stakeholders to join their efforts to provide drivers with access to 100% of public charging stations.

Currently trading at a $28 million market valuation. This is an exciting story developing in small caps; CCGI holds the keys to an industry poised for massive growth. Short term CCGI could go much higher, long term it could drop once the excitement is over and if it isn’t able to turn a profit.

We will be updating on CCGI when more details emerge so make sure you are subscribed to Microcapspot so you know what’s going on with CCGI. 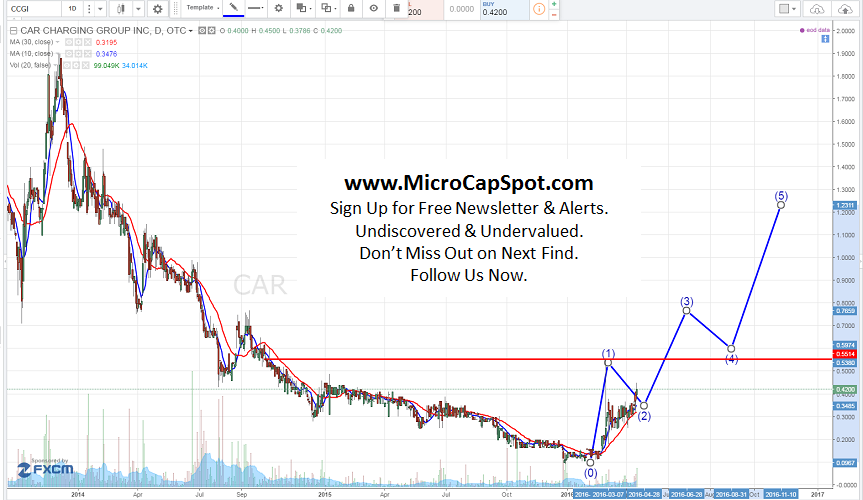 Disclosure: we hold no position in CCGI either long or short at the publication of this article.