Cannabis Related Stock CannaVEST Corp (OTCMKTS:CANV) recently announced that it had prepaid the remainder of its convertible debt. The stock surged over 75% locking in gains of $0.283 and ending the day at a closing price of $0.658. Volume has increased significantly with over 1.7 million shares trading hands today. This is almost 3x its daily average volume of 0.6 million shares.

A likely reason for the surge in CANV share price is due to a report that was issued earlier today about the cannabis industry. Several cannabis related stocks surged towards the end of business day when the report was released. The report showed that the cannabis industry is set to reach $44 billion by 2020. This is roughly the size of Netflix or Caterpillar, two mammoth companies.

The report issued by the same company last year showed that the marijuana industry for 2016 was expected to reach $14 to $17 billion. CANV can stand to benefit from just the growth in the industry as it lifts all boats who operate in the industry. CANV has surged over 250% since the beginning of the year and shows no signs of slowing down.

According to the report, the industry has an economic multiplier of four. So for every $1 that is spend on the cannabis industry it generates in additional $3 towards positive economic activity. The main drivers of the rapid grow in the industry is due to recreational sales in Colorado, Washington, and Oregon. In addition, a medical marijuana market (where medical marijuana is legalized) has been growing quickly as well. New states are joining the legalization of medical marijuana including Illinois, Nevada, and Massachusetts.

Actual cannabis sales is estimated to be $3.5 billion to $4.3 billion for 2016 which is just states where recreational and medical marijuana is legalized. That is roughly over $1 billion increase over 2014. It is estimated that the black market and the legalized marijuana market is anywhere between $30 billion and $45 billion in the United States. 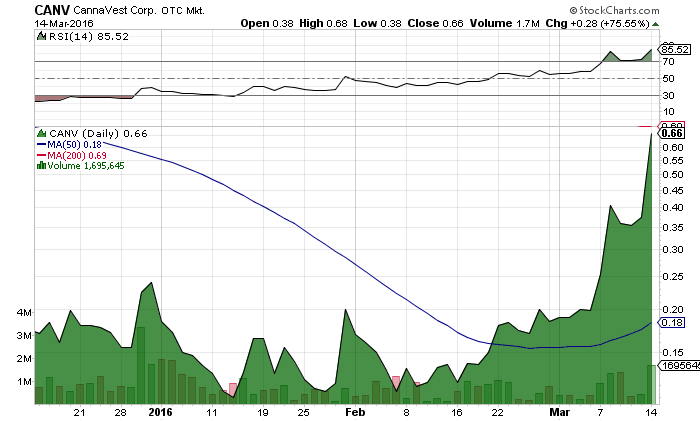 CANV is currently trading at a $23 million market valuation. The stock has skyrocketed on the overall rapid growth of the marijuana industry. CANV will benefit significantly from increased sales and market growth. As more and more states legalize marijuana, CANV will continue to be a beneficiary.

We will be updating on CANV when more details emerge so make sure you are subscribed to Microcapspot so you know what’s going on with CANV.

Disclosure: we hold no position in CANV either long or short and we have not been compensated for this article.